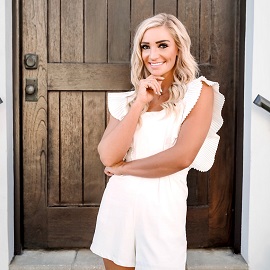 Morgan has been selling real estate since 2017. Prior to that, she was a stay-at-home mom. The thing she enjoys doing most is spending time with family and taking trips to Universal Studios. She loves being outdoors and has just recently found a love for hunting with her boyfriend Drew.

She has been a resident of Bay County since 2008. Initially, she went to school to work in television/radio. She worked as an On Air Personality at a top 40 radio station for a short period of time before she realized she needed more personal interaction with people. She modeled for a few years in her 20s and has played Extra roles in a few tv shows and commercials. In her free time, you may find her shopping. Two of her favorite things in life are clothes and home decor. She loves to help friends, family, and customers with their decorating inspiration.

Morgan enjoys getting to work with homebuyers and sellers, and over the past years she has had to opportunity to work with so many. She really enjoys the experience of helping a first-time homebuyer. There is so much excitement and joy in purchasing your very first home, that is your own. She’s had the honor of working with several military families moving to the area. Several of those families were unfamiliar with the area, so she was able to show the homes virtually instead of in person.

Are you ready to buy, sell, or invest in Bay County, Florida?
Call Morgan Mason, Realtor with Think Real Estate.