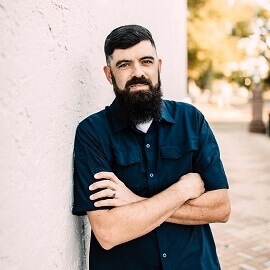 BJ Bray was born and raised in Kentucky where he learned how to work hard for what he had. He loves the outdoors and is an avid bow hunter and excellent fisherman thanks to his dad. His dad taught him to work hard and play harder.

He joined the US ARMY at the age of 17 and traveled around the World a few times. After four years and a lot of growing up, he parted ways with his friends and came back to Kentucky where he began pursuing a career in Law Enforcement. He married his childhood crush in the meantime, and she helped him achieve my goals. He became a Deputy Sheriff in his hometown of Adair County Kentucky. He served his community for 8 years and was given a chance to travel and work in the Government Contracting world. He and his wife never looked back. Those few little decisions (and a couple trips around the world together) led them here to Bay County, Florida. They have been married since 2007 and are expecting their first child. They are so excited to raise her up on the beautiful beaches of Northwest Florida.

BJ’s Uncle became a Real Estate Agent in Kentucky, and they began discussing his day-to-day activities. He explained how being a Realtor gave him so many opportunities to help folks find their way through the unfamiliar territory of buying a home or property to build a home on. That intrigued BJ. He enjoys helping others. He’s the guy that stops on the side of the road to help someone change a flat tire. He enjoys helping people be happy.

He immediately began earning his Real Estate License and joined the THINK TEAM shortly after passing the State Exam. He wants to help you find your first home, your second home, your rental property, your tract of land to build on or your little slice of Hunting Heaven (or big slice- up to you).

Are you ready to buy, sell, or rent in Bay County, Florida?
Call Think Real Estate and talk with our dedicated real estate team.